The Stoner Python package is a set of utility classes for writing data analysis code. It was written within the Condensed Matter Physics group at the University of Leeds as a shared resource for quickly writing simple programs to do things like fitting functions to data, extract curve parameters, churn through large numbers of small text data files and work with certain types of scientific image files.

For a general introduction, users are referred to the Users Guide, which is part of the online documentation along with the API Reference guide. The github repository also contains some example scripts. 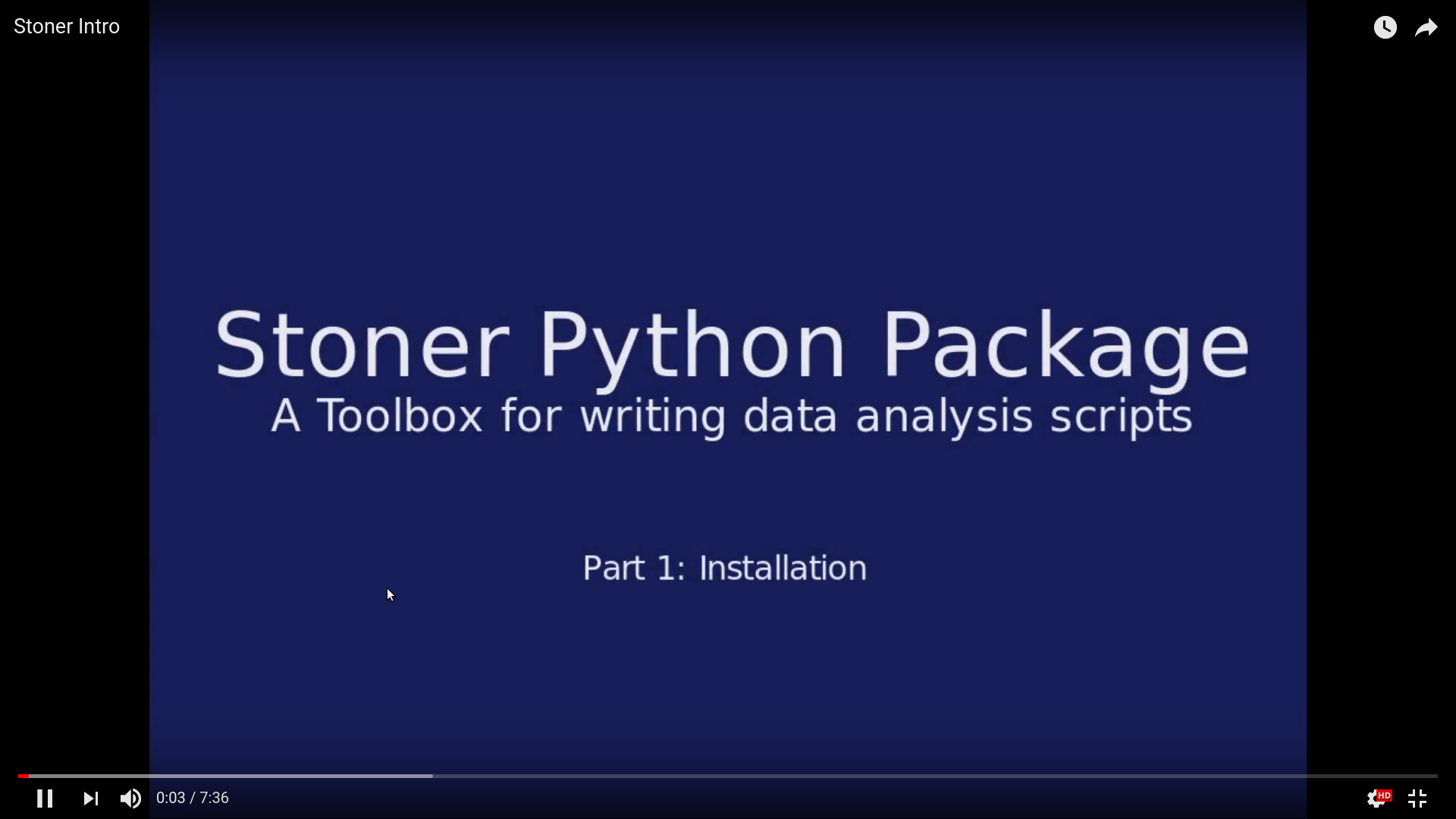 Versions 0.10.x (stable branch) are compatible with Python 3.6-3.9. The current development branch is targetting v3.8-3.9 with 3.10 added when anaconda support is available in mainstream realease.

Conda packages are built on each github release via a github actions for 64bit Python on Windows, MacOS and Linux.

After installing the current Anaconda version, open a terminal (Mac/Linux) or Anaconda Prompt (Windows) an do:

If you are not using Anaconda python, then pip should also work:

This will install the Stoner package and any missing dependencies into your current Python environment. Since the package is under fairly constant updates, you might want to follow the development with git. The source code, along with example scripts and some sample data files can be obtained from the github repository: https://github.com/stonerlab/Stoner-PythonCode

For our research, a typical single experimental data file is essentially a single 2D table of floating point numbers with associated metadata, usually saved in some ASCII text format. This seems to cover most experiments in the physical sciences, but it you need a more complex format with more dimensions of data, we suggest you look elsewhere.

Increasingly we seem also to need process image files and so partnering the experimental measurement file classes, we have a parallel set of classes for interacting with image data.

The general philosophy used in the package is to work with data by using methods that transform the data in place. Additionally, many of the analysis methods pass a copy of the data as their return value, allowing a sequence of operations to be chained together in one line.

This is a data-centric approach - we have some data and we do various operations on it to get to our result. In contrasr, traditional functional programming thinks in terms of various functions into which you pass data.

Stoner.Data is the core class for representing individual experimental data sets. It is actually composed of several mixin classes that provide different functionality, with methods to examine and manipulate data, manage metadata, load and save data files, plot results and carry out various analysis tasks. It has a large number of sub classes - most of these are in Stoner.formats and are used to handle the loading of specific file formats.

Stoner.ImageFile is the top-level class for managing image data. It is the equivalent of Stoner.Data and maintains metadta and comes with a number of methods to manipulate image data. The image data is stored internally as a masked numpy array and where possible the masking is taken into account when carrying out image analysis tasks. Through some abuse of the Python class system, functions in the scpy.ndimage and scikit-image modules are mapped into methods of the ImageFile class allowing a very rich set of operations on the data sets. The default IO methods handle tiff and png images and can store the metadata of the ImageFile within those file formats.

Stoner.DataFolder is a class for assisting with the work of processing lots of files in a common directory structure. It provides methods to list. filter and group data according to filename patterns or metadata and then to execute a function on each file or group of files and then collect metadata from each file in turn. A key feature of DataFolder is its ability to work with the collated metadata from the individual files that are held in the DataFolder. In combination with its ability to walk through a complete heirarchy of groups of Data objects, the handling of the common metadata provides powerful tools for quickly writing data reduction scripts.

Stoner.ImageFolder is the equivalent of DataFolder but for images (although technically a DataFolder can contain ImageFile objects, the ImageFolder class offers additional Image specific functionality). There is a subclass of ImageFolder, Stoner.Image.ImageStack that uses a 3D numpy array as it’s primary image store which permits faster access (at the expense of a larger memory footprint) than the lazy loading ordered dictionary of ImageFolder

The Stoner.HDF5 module provides some additional classes to manipulate Data and DataFolder objects within HDF5 format files. HDF5 is a common chouse for storing data from large scale facilties, although providing a way to handle arbitary HDF5 files is beyond the scope of this package at this time - the format is much too complex and flexible to make that an easy task. Rather it provides a way to work with large numbers of experimental sets using just a single file which may be less brutal to your computer’s OS than having directory trees with millions of individual files.

The module also provides some classes to support loading some particular HDF5 flavoured files into Data and ImageFile objects.

The Stoner.Zip module provides a similar set of classes to Stoner.HDF5 but working with the ubiquitous zip compressed file format.

Included in the github repository are a (small) collection of sample scripts for carrying out various operations and some sample data files for testing the loading and processing of data. There is also a User_Guide as part of this documentation, along with a complete API reference

The lead developer for this code is Dr Gavin Burnell <g.burnell@leeds.ac.uk>, but many current and former members of the CM Physics group have contributed code, ideas and bug testing.

The User Guide gives the current list of other contributors to the project.

This code and the sample data are all (C) The University of Leeds 2008-2021 unless otherwise indficated in the source file. The contents of this package are licensed under the terms of the GNU Public License v3

The current version of the package on PyPi will be the stable branch until the development branch enters beta testing, when we start making beta packages available.

The current development version is hosted in the master branch of the repository and will become version 0.11.

At the moment the development version is maily broen….

We maintain a digital object identifier (doi) for this package (linked to on the status bar at the top of this readme) and encourage any users to cite this package via that doi.

Version 0.9 is the old stable version. This is the last version to support Python 2 and 3<3.6. Features of this release are:

Version 0.8 is the very old stable release. The main new features were:

No further relases will be made to 0.7.x.